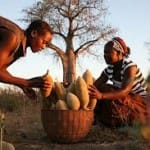 The other day, I was reading a poem by Seamus Heaney about a line of aid workers passing along sacks of grain when I was reminded about an incident from my own childhood. I was born in South Africa, and spent my later years in Rwanda, Burundi, Congo-Brazza and Zaire, now the Democratic Republic of Congo, as well as East Africa and Zimbabwe.

This particular memory is from the western shore of Lake Kivu in the eastern highlands of Zaire. When we dropped down in the Cessna onto the airstrip, we saw a line of workers passing bunches of bananas and crates of citrus fruit, papayas and mangoes.

“Where are these going?” we asked.

“It is an aid project where we are supplying Kinshasa [the other side of the country] with our fruit,” came the answer.

We came back to get on the Cessna four days later. The fruit was still by the runway, beginning to rot.

It turned out that the then President Mobutu’s uncle Litho controlled the import of fresh fruit – particularly citrus fruit, which could not be grown in the Congo basin – from South Africa to Kinshasa, so the promised (apparently donor-funded) DC-3 never arrived.