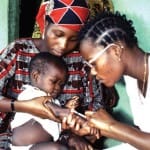 James Snodgrass, associate at Baird’s CMC, has a special interest in vaccination programmes in underdeveloped parts of the world. In fact, he has a personal link with Sub-Saharan Africa. His parents were diplomats, which meant the family was posted in different countries all over Africa during James’ childhood. “I was born in South Africa, and spent my later years in Rwanda, Burundi, Congo-Brazza as well as Zaire, now the Democratic Republic of Congo, as well as East Africa,” says James. His education took place largely in the U.K. since, as James explains, “At the time, there was no provision for English-language international schools in Zaire. However, I’d spend all my holidays there with my family.”

As is the case now, Zaire had almost no tourist facilities back when James was growing up, so there were no hotels in most places. When the family visited different parts of the country, they’d often stay with aid missions out in the bush. The only mode of travel was a Cessna light aircraft, and the journeys between destinations involved endless hours of flying over the jungle – journeys during which everyone would cross their fingers and hope that plane had been properly maintained!

“I saw first-hand how difficult it was to develop health or indeed any type of service in one of the most challenging environments in the world, both in terms of vast geographical distances as well as the fact that most of the country is covered in dense tropical rainforest,” says James. He learnt a lot about the nuts and bolts of delivering healthcare and aid in such an environment, reaching the conclusion that the greatest challenges in Sub-Saharan Africa were basic things that the Western world takes almost for granted – things like supply chain management and logistics. As James puts it, “The process of trying to achieve things in this kind of market throws up obstacles that are hard to imagine when you’re used to working in a Western context.”

James recalls some of the places he visited as a young man with a still-intact sense of wonder. “Zaire was, and still is, a spectacularly beautiful country. It’s like no place most of us outside of Africa have ever seen…strange beyond description. The foliage and animals are startling when you see them for the first time – or even the tenth! I remember going to the Ruwenzori Mountains, also known as the legendary Mountains of the Moon. We saw bushes that look like domestic garden shrubs that grow to a height of about two feet – except that these were five yards high! The familiar is rendered unfamiliar there. It was such a surreal experience.” James strongly recommends that anyone who hasn’t been to that part of the world make a trip. “It’s definitely worth it,” he says with a smile.